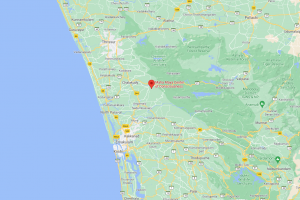 Legend says that Warrior Sage -Parasuram, avatar of Lord Vishnu, the preserver of the universe, stood on a cliff and ordered the violent sea to recede by throwing his warrior axe in the sea. The sea obeyed his commands and the land that egressed of the sea waters came to be known as Kerala, the land of abundance and affluence.

Kerala, literally translated as "land of coconut palms", is located on the tropical southern tip of India – embedded/situated between the 580 km long Malabar coastline of the Arabian Sea and the mountain range of the Ghats.

Our Maha Maya Center is located in the lush central plains of the Thrissur district between the great rivers, Periyar and Athirappily. Just 40km from the beaches of Kochi (second largest city). In the vicinity of the centre are the Chimmin Game Reserve, the Sholayer Forest Reserve and the Eravikulam National Park with its 2,600m high Anamudi peak. The neighboring villages of Chalakudy and Angamaly are 15 km away.

Almost a third of the state’s area is still pristine forest with dense tropical undergrowth. The natural vegetation of Kerala is largely endemic and consists of almost 4,000 flowering plants that are used in India's Ayurveda healing treatments.

The region’s main crops are rice - more than 600 varieties grow in the rice fields of Kerala - and tapioca. An important source of income for the region, based on more than 3,000 years of tradition, is the cultivation of spices such as cardamom, cinnamon, turmeric, nutmeg and vanilla. Kerala supplies pepper to all of India! Other essential cash crops are tea, coffee, coconut, betel nut, ginger, and cashew nuts. Red, green or yellow varieties of bananas are also widely cultivated. Kerala is the leading rubber plantation state in India. It accounts to 92 percent of the country's total natural rubber production.

Hindus, Muslims and Christians live peacefully side by side in Kerala. 27% Muslims, 18% Christians and 55% Hindus to be precise. Mosques can be found next to churches or temples in given city.

There are some districts in which one religion is more pronounced. Suffice to say, there are many Christians living around the Maha Maya Center and on Sunday mornings Christian chants can be heard because a large church plays the Service/Mass over the loudspeaker, as is customary in India.